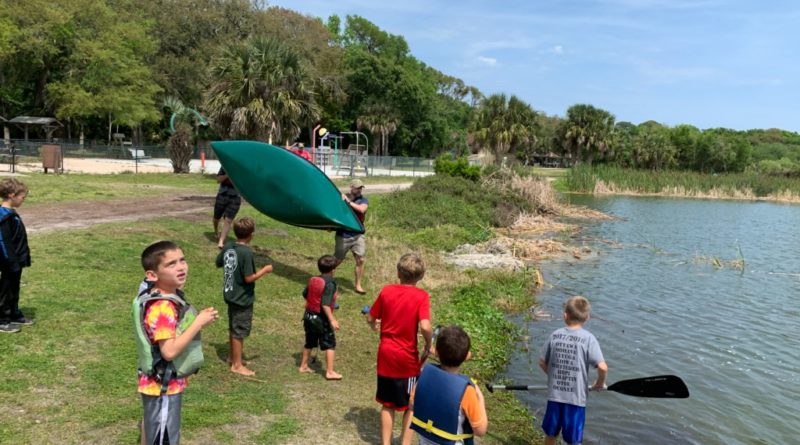 Knowing that shad (fish) swim from the ocean into rivers to spawn in April each year, coastal fishing tribes named the April moon the “Fish Moon”. The Apache and Algonquin Nations gathered on April 5th-7th under the Fish Moon at Hanna Park for the 2019 Boys Spring Longhouse. This all-boys camp-out by the sea, under the Fish Moon, was filled with activities in and around the water. 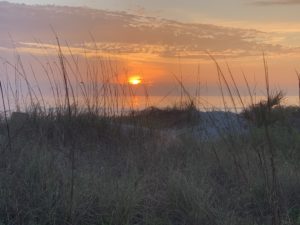 Our boys’ families are now pretty familiar with Hanna Park. We held our 2018 Spring Longhouse there. We had also just completed a hiking/biking trail cleanup service project the week before, benefiting Hanna Park, Timucuan Parks Foundation, and SORBA Jax. It was satisfying to return the next week, and reap the benefits of our labor on the beautiful trails that run throughout the park.

After the opening ceremony on the beach on Saturday morning, our tribes got started in a sand sculpting competition. Their goal was to sculpt something with marine animals in the sand. With their shovels, pails, sticks, and shells, the boys’ creativity and innovation quickly impressed the judges. The Mohican tribe took first place for their Native Sons & Daughters logo, complete with a very large turtle in the middle. The Ottawa tribe came in second with their epic gator vs. gator battle, with a live mermaid watching nearby. The Kiowa tribe came in third with father and son turtles with seashells as their shells. 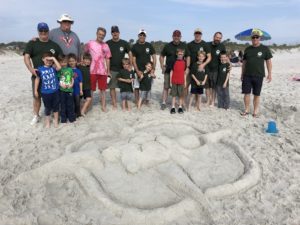 While on the beach, we went straight into the ever-popular egg toss. We had more bouncing eggs this year than we’ve ever seen. Maybe the soft sand was helping a little. For the first time in a while, we have some new names on the medals. 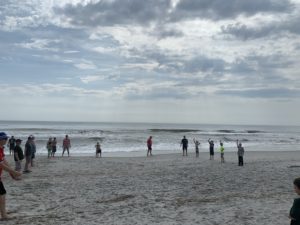 After lunch, we gathered by the lake for more fun in the water. We’ve done a canoe relay a few times in the past. This year we stepped up the canoe relay by adding a portage leg between each of the 3 canoeing legs. The canoe relay is more of a “if you’re not first, you’re last” kind of event. This year’s winner was a hard-working never-surrender tribe, and a previous year winner: the Mohave tribe. Well done, Mohave. You should be proud to hold the canoe paddle trophy. Chottawa (Chippewa/Ottawa team) and Oconee were very close. They’ll need to train more in the off-season if they have any hope of beating the powerhouse Mohave next year.

Our last structured activity for the day was a new target skills challenge. The two frisbee challenges was the easiest for us. Bean bags were a little more difficult than everyone thought, with the target being vertical instead of horizontal like cornhole. 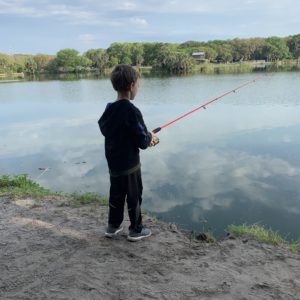 The fishing target challenge proved to be near impossible with only one family getting a combined 4 hits out of 20. Mohican came out on top, but not by much.

For the first time, we also had a fishing tournament this weekend. Starting at 3pm on Friday until sunset on Saturday, the boys and their fathers had the option to fish in the lake or the ocean to catch the longest fish. Only three fish were caught, which made for an easy set of awards. 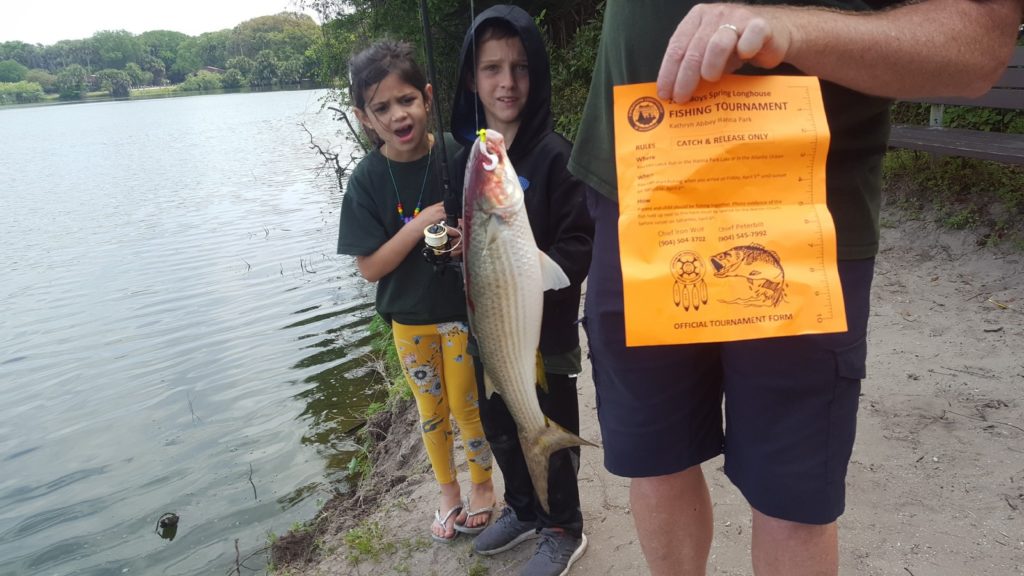 After our shared federation dinner by the lake, the weather moved in. It rained on and off for hours. In my years in the program, the Great Spirit has never delivered weather sever enough to cancel a Sacred Fire ceremony. This night would be no exception. Delayed and pretty wet, we held our Sacred Fire ceremony. This included the spring traditional Breaking Arrow ceremony where our older members graduate into the Pathfinders program. The only family breaking arrow this year was the outgoing Algonquin Nation Chief, Peterbilt, and his son Diesel Eagle.

We’ll still be seeing a lot of Chief Peterbilt and his son, and expect that they’ll be very active members in the Pathfinders. We thank Chief Peterbilt for his years of service as a Nation Chief, building memories and experiences for all of our boys’ families.

At closing ceremony, we acknowledge the winners of our events and any special awards. The Best Camper Award was presented to Wandering Mongoose of the Mohave tribe. He is one of the younger members in the group, but kept up with all of the bigger boys and participated with his dad in every event. The Best Tribe Award was presented to Shawnee for camp setup with a great fire, good bribes, and participation. More special recognition was given to Jackrabbit and Fast Rabbit of the Shawnee tribe who helped the Nation Chiefs cleanup on the beach.

We now look forward to the fast-approaching summer with no school, fun in the Florida sun, and making new friends. We also look forward to making more father-and-son memories when the program wakes back up when school starts again in the fall. 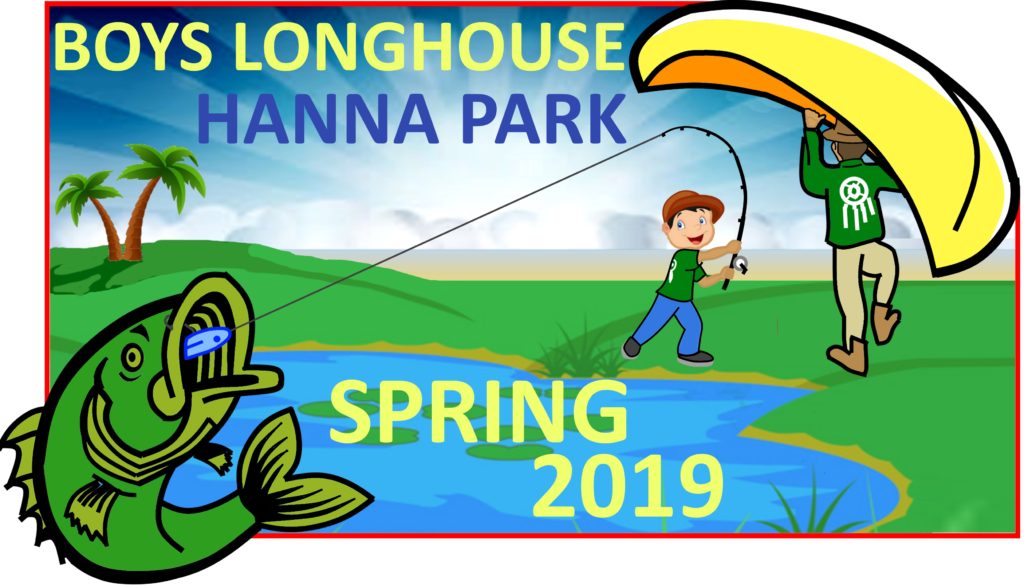 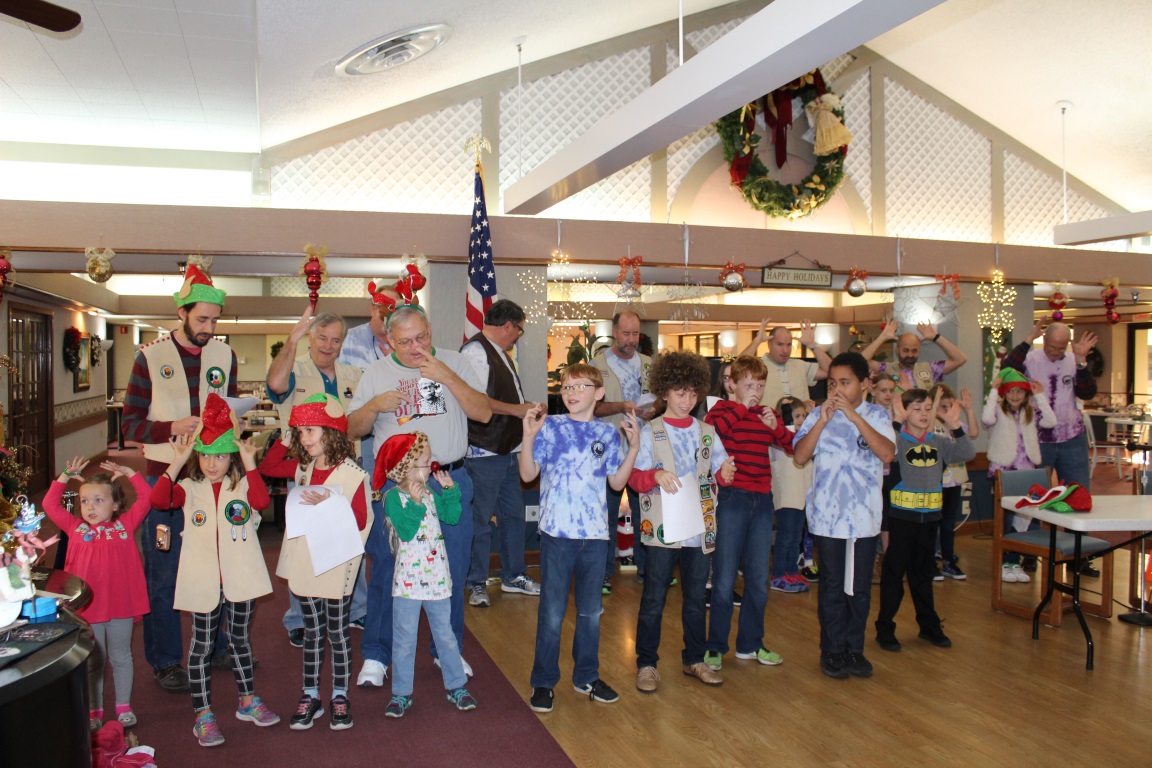 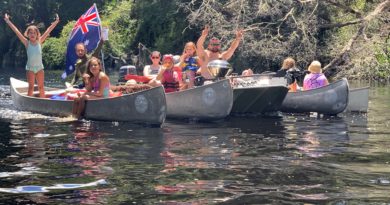