New Tribe Chiefs ask me all the time, “What can I do to add excitement to our tribal meetings?” I respond to them the same way I do to New Tribe Sponsors as well. Schedule a quick meeting with the Big Braves only and explain to them the Great Eagle Feather Award Program.

I realize that the number of patches on the older member’s vests can be intimidating to a first year tribe. The Eagle Feather Award program is a great way to begin to adorn your vest. The program has been established to provide new tribes a way to organize 17 separate joint activities that upon completion, a different “feather” is awarded to the Big Brave and child.

As you can see, multiple activities count towards earning each of the 17 feathers awarded in the program. This program is an excellent way to organize planned outings, meetings, craft building and overall bonding within the tribe. There are no rules as to the sequencing of earning the feathers so pick a feather, energize the tribe and make a big deal about earning each of them.

Once the tribe members have earned all the feathers, we alert the Nation Chief and he presents the ceremonial Eagle Feather patch at the Spring Longhouse in front of the entire Nation. Only ones acting skills limit the theatrics of this very special recognition of our children.

To order the Eagle Feather Patch program, you can contact The Patch Store at www.thepatchstore.com or at 800-537-2824.

How To Earn Each Feather 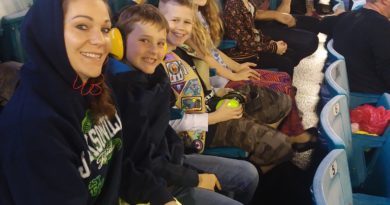