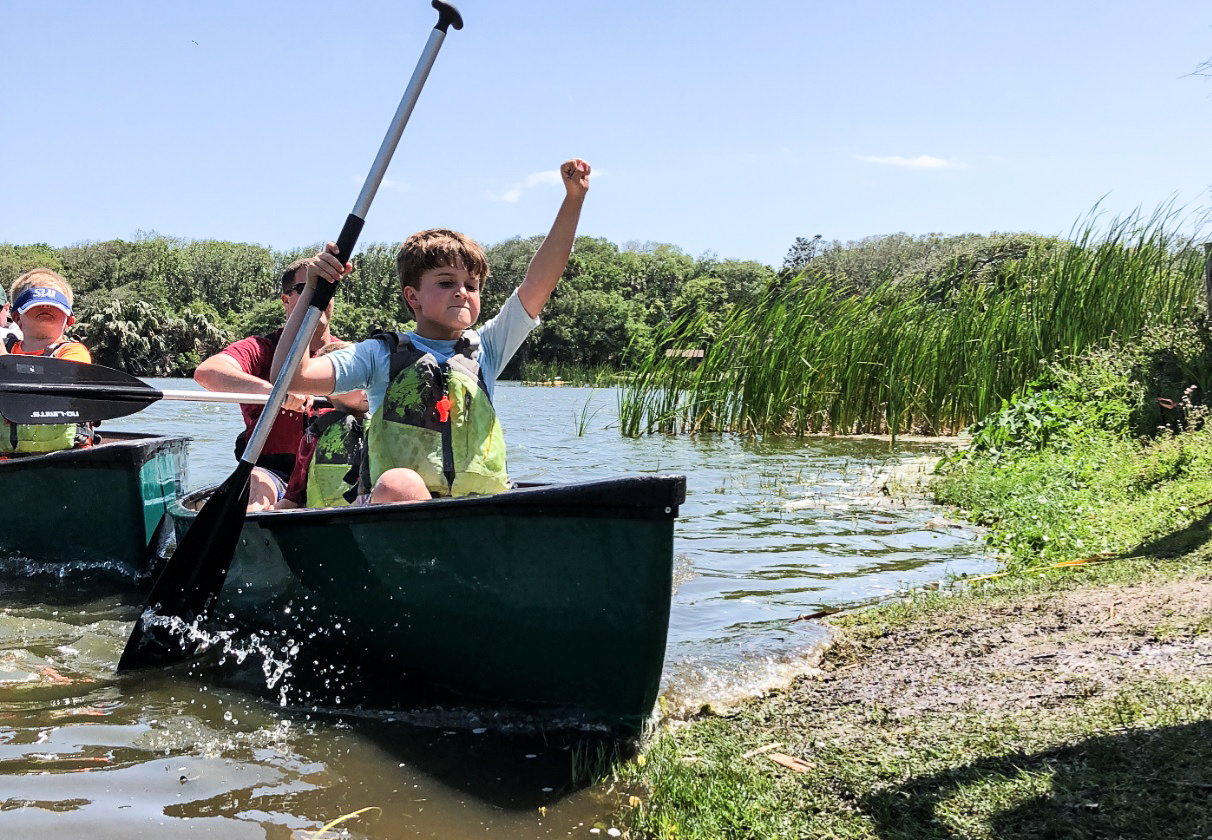 It had been several moons since the Timucuan Federation’s boys tribes had gathered for a longhouse. Under the big spring moon, the Algonquin and Apache Nations met for what would end up being a most memorable weekend of camping, adventure, and fellowship.

The 2018 Boys Spring Longhouse took place at Kathryn Abbey Hanna Park. It is a park run by the City of Jacksonville, having a 1.5 mile public ocean beach, a sizeable campground, a beautiful lake, and 20+ miles of mountain bike and hiking trails. With a venue such as this, you don’t have to try very hard to have an amazing experience.

The tribes started rolling in on Friday, setting up camp and getting to know their surroundings. Some Kiowa boys wasted no time and started fishing at the lake before the tents were set up. As the sun set, the campground was bursting with the sights, sounds, and smells of campfires, happy kids, and great food. A movie screen was set up next to the Shawnee encampment, providing some safe nighttime entertainment. It was a late night for some, but everyone slept well with excited anticipation for the new day. 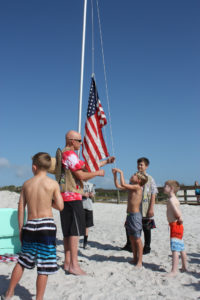 The plan for Saturday was action-packed. After a brief Chief’s meeting, tribes finished their morning meals and headed to the ocean for the opening ceremony. Oconee, as the newest tribe, had the privilege of raising the American flag. We immediately moved into the sandcastle competition. Each tribe found their stake in the sand that marked their castle location. All tribes had fun and built solid, defensible structures (like boys do). In the end, it was the architectural geniuses of the Coyotero tribe that won the top prize with a deep moat, watchtowers, and a wooden drawbridge.

While already sandy and wet, focus switched quickly to the ever-popular egg toss. Dads lined up on one line in the sand, and boys lined up a few yards away. Kids toss the first egg, then the dads. After each toss, the dads take one step back until a winner is crowned by having the last unbroken egg. The hard sand was unforgiving, and many competitors were forced out early. However, several veteran father-son teams stayed in the competition until Team Black Hawk and Flaming Eagle edged out their final same-tribe opponent. To clean up, the boys spent some time wave jumping in the ocean before tiring and making their way back to camp.

Tribes reconvened after lunch at the lake for the longhouse canoe relay, back by popular demand. Eight teams were formed by individual tribes, and the merger of the Yuma tribe, once large in number, with the Pathfinders. 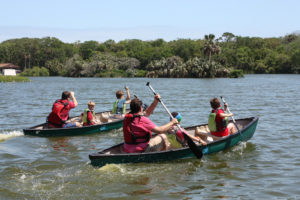 A single elimination bracket was established, setting tribes up to be able to win the trophy by winning four consecutive relays. Two canoes, one for each tribe, were put into the water. The relay consisted of 3 legs, with a father-son pair transition between each leg. Reigning champions, the Mohave tribe, were very light in numbers this time, having only one family in the competition. Despite not having extra bodies, and arms, to paddle, Mohave managed to come in 2nd place. Last year’s 2nd place tribe, Kiowa, came to this event with great energy and enthusiasm. Kiowa crushed the competition, with the help of a few strong winds to push the opponents off course, and proudly raised the 1st place trophy over their heads.

The last activity was a hiking scavenger hunt along one of the easier trails at Hanna Park. Chief Crockwater hid ten clue containers, camouflaged with Spanish moss, along a 1.5-mile stretch of trail. Each tribe had to retrieve all ten clues and then solve all ten riddles before providing the answers to the Chief. This forced fathers and sons to work together to solve extremely difficult riddles. The older, faster, and wiser Pathfinders won the event with the Ottawa and Kiowa tribes not far behind.

After a day full of fun, all tribes met at the lakefront for a feast. Chief Two Toed Brown Bear, one of the three girls nation chiefs, worked hard all day on the smoker to cook up some delicious brisket, chicken, and ribs. Each tribe provided a side dish, with some of the most popular being jambalaya, kicked up green beans, and fire-roasted corn. With another beautiful Florida sunset over the lake as a backdrop, dads and sons regaled each other with tales of the day’s events.

On Saturday night, one of Timucuan’s ritual ceremonies took place as all of the tribes gathered for the silent walk to the Sacred Fire Ceremony. Luminaries lit the path from one end of the campground to location of the Sacred Fire. The Federation Council, including the Nation Chiefs, were dressed in regalia to welcome the tribes. It is at the spring fire ceremony where the older tribes and tribe members graduate from the program with a sentimental “Breaking Arrow Ceremony”.

This year’s fire ceremony was made even more special as tribes were present to witness the “Changing of the Headdresses”. The outgoing and incoming Federation Chief, assisted by their sons, exchanged headdresses to symbolize the change in command. Timucuan warmly welcomed our new Federation Chief, Joe “Big Red” Woodlief, and our new Medicine Man, Steve “Red Bear” Sharpe. 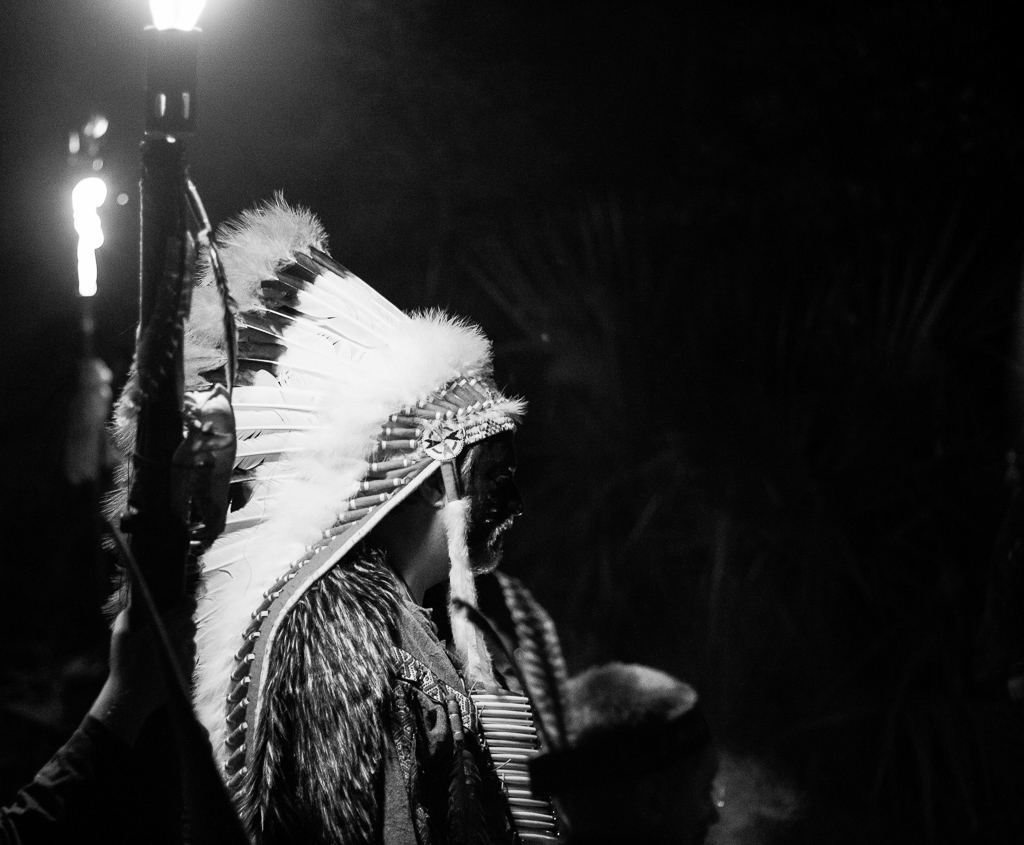 North Florida weather has pushed us to the edge of summer, when the heat forces our program into a slower pace. With this last hurrah for the 2017-2018 program year, we once again found our busy but dedicated group of fathers making the time to spend with their kids during these most precious times. This amazing weekend will undoubtedly be etched into the minds of the parents and children as cherished lifelong memories. 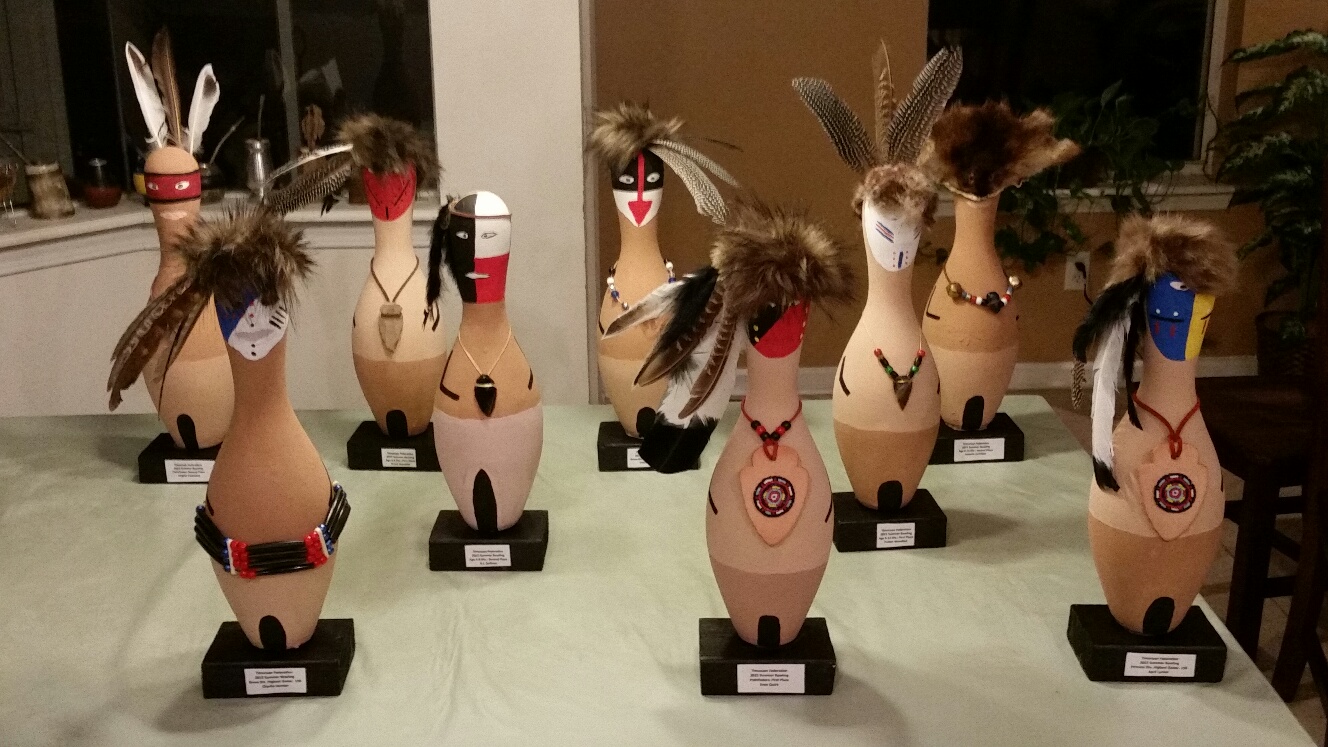 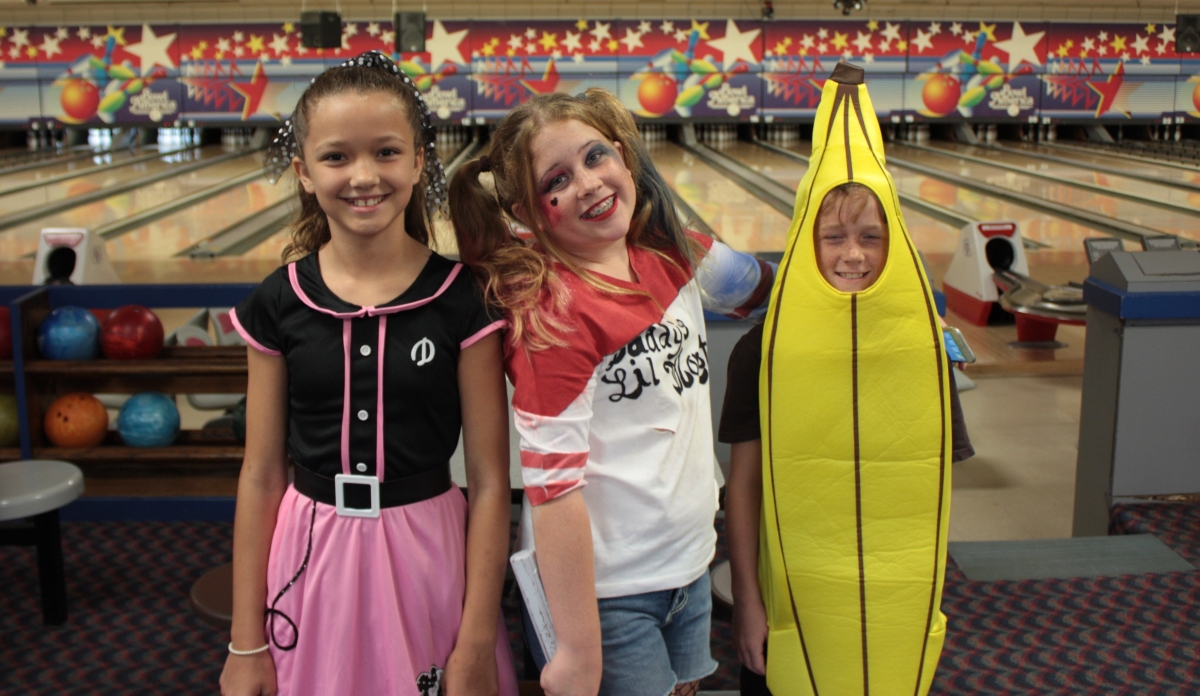